Why not preach Philemon?

ESR's Stephen Angell delivered the following message during worship on September 6, 2016:
Although Paul’s epistle to Philemon is one of the Scriptural texts suggested by the Revised Common Lectionary for this week, I have never heard a sermon given on this text. This provoked me to think about what I, or the broader Christian church, might be missing by not hearing more sermons on Philemon. 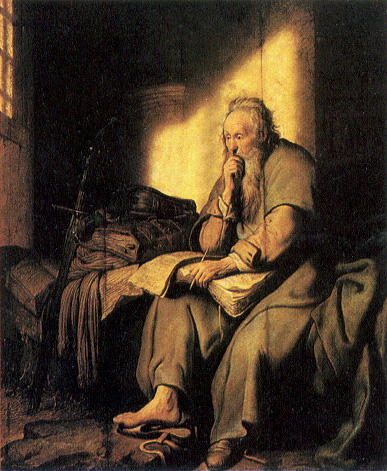 The evangelical Presbyterian Charles Colcock Jones (1804-1863) was, according to American National Biography Online, “a wealthy planter … best known during his lifetime as a tireless worker for the evangelization of African-American slaves. … Hundreds [of slaves] joined one of his churches [in Liberty County, near the Georgia sea coast.] … Though he was frequently sought out for advice and counsel, slaves never forgot that Jones was a slaveholder and their response was always filtered through that reality.”
Once, possibly in the 1830s or 1840s, Jones chose the text of Philemon for his open air church service for slaves. This choice of text did not inspire a favorable response from his audience. According to Jones (as recorded in his diary), “When I insisted on fidelity and obedience as Christian virtues in servants and, upon the authority of Paul, condemned the practice of running away, one half of my audience deliberately rose up and walked off with themselves, and those who remained looked anything but satisfied, either with the preacher or his doctrine. After dismission, there was no small stir among them; some solemnly declared that there was no such Epistle in the Bible; others, that they did not care if they ever heard me preach again.”
(That’s questionable exegesis – Paul uses the word “obedience” once in this epistle, in verse 21, and it is applied to Philemon. Paul is hoping for Philemon’s obedience. He mentions nothing about Onesimus’ obedience.)
Lucretia Coffin Mott(1793-1880) is widely known for her tireless labors on behalf of abolitionism and women’s rights. She would never have chosen the book of Philemon as one on which to base her message to a hushed Quaker gathering or any interfaith assembly of abolitionists. But, in 1842, she attended a Quaker quarterly meeting in New Jersey, where conservative Hicksite George F. White “preached of Onesimus being sent back to Philemon. . . He … carried many with him.” (Letter to Nathaniel Barney, 10th mo. 8, 1842) Mott was also moved by God to speak on that occasion, and she records that she spoke as if White had not been present. This could be seen as a subtle rebuke to White. Later speakers in a Quaker meeting often attempt to bring in strands of the insights of earlier speakers. But Mott implied that White’s use of Philemon, at least in this particular way to celebrate Paul’s decision to return a fugitive slave to his master, was not at all inspired and thus she would take no notice of this previous message.
The historical realities that shaped the preaching of Jones, Mott, and White, and the responses of their audiences are close enough to our own reality in the United States (even after the Emancipation Proclamation and the Thirteenth Amendment) that we may well find the presence of Philemon in the Scriptural canon as an embarrassment. Perhaps we sympathize with the seventeenth-century Quaker theologian Samuel Fisher who objected to the presence of Philemon in the canon, because it had no worthy spiritual dimension. Since it dealt only with “private” and “domestick” matters, Fisher argued, its relevance beyond the initial audience of one for which it was intended was highly suspect.
At the least, it is a text to be handled with care.
But I wonder what interpretive possibilities have been missed with this text. What might be done with a reader-centered interpretation of this intriguing narrative? Can we understand this story as an exercise in contextual ethics? Unlike Paul’s other epistles, there are no matters directly relating to proper Christian doctrine in this epistle; it deals with matters that, within a seminary curriculum, have fallen under the province of ethics and pastoral care.
As a Jew who is a person of privilege, specifically of citizenship privilege, because he is a citizen of the prevailing empire, Paul has been led to address a friend, a clerk of a Quaker meeting (or, if you insist, the leader of a “house church”), who is another person of privilege, a slaveholder, who under the laws of that same empire owns another human being. Paul wants this other person of privilege to relinquish some of his privilege, by emancipating a person that he owns. Could this have any relevance to our own situations? Christians, throughout two millennia of history, have often interpreted the Apostle Paul, and his addressees, and the people that Paul discusses, as Every Person; we can readily identify with all sides of the dilemma.
You can read more from Steve here: http://esrquaker.blogspot.com/2016/09/why-not-preach-philemon.html