I wish Becky Ankeny had achieved her goal in her new ebook,
A Leisurely Introduction to How a Bible-Believing Christian Can Accept Gay Marriage in the Church.

Because:
I support equality in marriage for everyone, both same sexual couples and opposite sexual couples. And not only is marriage a human right, it is very important for ethical truth.

Too often in the past, and especially in contemporary culture and society, millions of humans choose promiscuity, polygamy, prostitution, pornography, loneliness and lack of intimacy, etc.

A chosen intimate, permanent covenant between two individuals in contrast delivers humans from the vagaries of immoral and unjust behavior. Even more importantly, is the deep sharing, communing, companionship, and the far-reaching goals two committed to each other
can achieve.

But it goes beyond that, too. A covenant is a transcendent experience which enhances humans' lives in other ways as well.

And, lastly (or firstly) a covenant is a witness to wonder, goodness, truth, justice--to the ultimate nature of reality.

Furthermore:
Becky Ankeny raises so many good points, and puts forward appealing positives in her short booklet. (It is well worth the dollar through Amazon!) She reminds readers of the differences between the "universal" versus the "cultural," the goodness but limited worth of analogies, and that caring is far more important than rules. 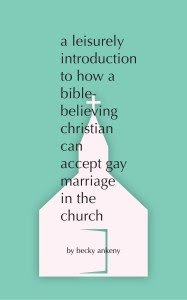 And the shocking fact, that she as a conservative Evangelical Quaker has published this pro-gay marriage book at the height/depth of the current debacle going on in North West Yearly Meeting, and that she is a former superintendent of that yearly meeting--ALL of that speaks volumes for her and her effort to give hope to same sexual individuals.

She is working for constructive change, going against the current rejection of gay marriage in NWYM which has been so harmful, divisive, and fragmenting in North West Yearly Meeting.* 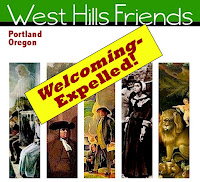 Similar divisive arguments are taking place in North Carolina Yearly Meeting (also, breaking up), and several years back in Indiana Yearly Meeting, as well as in other denominations beyond the small circle of Friends.

So I admire Becky Ankeny, standing up and speaking truth to friends, their meetings, yearly meetings, and all others concerned with ethics, equality, compassion, intimacy, and hope.

Brief Bio: "Becky Ankeny is a former general superintendent of the Northwest Yearly Meeting of Friends...a member of Newberg Friends Church. Her parents were Friends missionaries in Burundi, Africa...and she spent much of her first 15 years there. She graduated from George Fox College in 1977 and received an MBA (2009) and PhD in English (1986) from the University of Oregon. Her PhD work was on the fiction of George MacDonald, a Victorian preacher and writer who influenced C.S. Lewis."

"She taught at Westmont College from 1986 to 1988 before returning to her alma mater, George Fox, to work as a professor of English and as an administrator from 1988 to 2011. Becky and her husband, Mark, are the parents of two daughters, Davida and Elizabeth, who with their respective husbands, Richard Brown and Jesse Dillow, all graduated from George Fox University. Becky and Mark rejoice in four grandchildren."
http://digitalcommons.georgefox.edu/noteable_individuals/65/

HOWEVER, Becky Ankeny's given explications of the biblical texts are very weak, swallowing a whole herd of camels.

But before I explain why I think she (and the scholars she quotes) have deeply erred in their understanding of the Bible's view of same sexual relations, please consider reading her booklet first. It is a brief version of much longer tomes which I have also read, a good introduction into the whole controversy.

And thank Becky Ankeny for standing up and sharing her own perspective, which she thinks is true.

*For an extensive explanation, details, and view of the controversy in NWYM, read Chuck Fager's
Quaker Theology, Issue #27, and more recent updates.
http://afriendlyletter.com/shattering-quakerism-in-the-northwest-co...

Posted by Daniel Wilcox at 10:44 AM No comments: Links to this post