Is This Presidential Election a "Seeding Time"? and book on Mennonites/Quakers during American Revolution

Is This Presidential Election a "Seeding Time"? 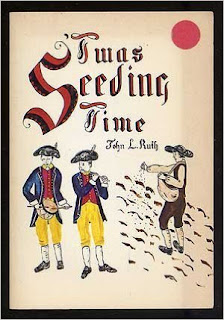 Would you agree or disagree with the following statements?

#1 Usually, war is justified when there is a dangerous enemy.

#2 The only way to understand what is happening and what ought to happen is to wait a couple hundred years to get a more objective perspective.

While we wonder at the tragedy, uncertainty, and even absurdity of our times, so have humans in the past.

We, at present, deal with Muslim jihadists, but the colonists dealt with savage Indians resisting the confiscation of their lands, and with the complex conflicts between the British and the French Empires on the American frontier, and then against the British government itself.

If one skips the nationalism, even the admirable patriotic legends of the Revolution, and reads a few history books, one soon discovers that the those troubled times weren't a clear case of good versus evil, or right versus wrong, or justice versus injustice (nor are nearly all--maybe all--historical events).

Nor is the present time. Who is correct? who is right?

The Syrian Government of President Assad which protected all of its citizens except for Sunni Muslim jihadists?

The Sunni Muslims jihadists that the U.S. Government supports, hoping they will overthrow the Syrian Government?

The Turkish Government which is killing Kurdish Rebels?

Ruth starts out his historical account in December 1755 at the start of the worldwide 7 Years War (known in the colonies as the French and Indian War).

The war involved all the European powers and "affected Europe, North America, Central America, West Africa, India, and the Philippines. Considered as the greatest European war since the Thirty Years War of the 17th century, it once again split Europe into two coalitions," Great Britain against France. (Wikepedia)

From the first page of Seeding Time:
"Angry Indians had crossed the long Blue Mountain...and left behind in the ashes of [immigrants'] cabins the smoldering, scalpless bodies of European settlers...their Swiss Amish father had forbade them to fire at the Indians..."

"The wounded Jacob Jr. and his sister were tomahawked on the spot, and the mother as well, after having been stabbed in the heart with particular malice"

"...No one was more troubled by such events than the Quakers, who up to this point had controlled the Pennsylvania legislature...Israel Pemberton...with fellow Friends...organized the "Friendly Association"...appealed to the Mennonites..."

"for aid in building up a fund from which presents could be purchased for meetings with the aggrieved Indians...on account of the unjust treatment of the Indians...This enraged the Scotch-Irish...[but] the devout Quakers...believed that nonviolence was the essence of the Christian faith..."

Benjamin Franklin (later one of the Revolutionaries) took a dim view of the Mennonites, Quakers, and their nonviolence toward the Indians.

So on the eve of the Revolution, these formerly oppressed Swiss-German Anabaptist Brethren and Quakers were living diligently in the Quaker Commonwealth of Pennsylvania in "Penn's Woods."

Then following the first battles in Massachusetts, during the spring of 1775, fervent war fever spread again like fire through the colonies including Pennsylvania. All men were under pressure to sign up to fight the British or to contribute money for the Revolution.

Thus whether we live now when nearly all presidential candidates are claiming we Americans should attack the Syrian government
and continue supporting the Islamic jihadists
(who we gave about 300 million dollars alone several months ago)
or
back in the 1700's, there are no easy answers.

So, too, as at the time of "Seeding Time" described by Ruth, those who oppose war find it very difficult to follow the way of peace-making when everyone is crying "War!
Go Fight!
Stop the Enemies!"

A fine short history book well worth the reading time.

In the Light of Peacemaking and Seeking,

Quakers need to work on their own narrative and not leave it to others to paint them into the picture.  That's partly why we have the AFSC and its many instantiations of NARMIC.
http://www.afsc.org/resource/national-actionresearch-military-indus...

The "standard history" of how America got to be a "superpower" (guffaw) is one I reject out of hand as a lot of made-up nonsense.  Quakers came to the New World to pioneer their peaceful lifestyles, not to get caught up in stupid Indian Wars.  But hey, when you're surrounded by "fellow citizens" with no recognizable ethics, other than to be warlike, it's truly an uphill battle to stay out of horrible "plays" (scenarios).  Wars are just theater.  Wars pander to what's base and ugly in humans -- and that's a huge market.

I'm very sympathetics to Angels who tell God that Man was a gruesome mistake.  That's what Satan (a chief angle, no friend of humans) thinks.  He's more articulate, in my mind, than any of these "presidential" candidates (referring ahead to a Satan thread).  Gnostics hold similar beliefs:  a lesser deity, trying to prove something, created Earth, a miscarriage of sorts, a monster.  This myths all inter-twine.  Subgenius, a modern gnosticism, spiels a similar mythos.

You wrote, "when you're surrounded by "fellow citizens" with no recognizable ethics, other than to be warlike..."

Yes. For a powerful analysis of this read the scholarly Quaker history, Peaceable Kingdom Lost: The Paxton Boys and the Destruction of William Penn's Holy Experiment.

The Paxton Boys were a theologically Reformed militia which murdered Indians, and stole land from Indians. They are most infamously know for murdering 21 Susquehannock Indians in the Conestoga Massacre.