How many Friends there once were!

This weekend I went to the gathering of the Wider Fellowship of Conservative Friends. It was held at Stillwater Monthly Meeting in Ohio Yearly Meeting. They have a beautiful and large meetinghouse. And then I started wondering...

I walked along a bench, counting out how many people I thought could fit on it. I counted the benches. I multiplied. By my reckoning, around 1300 Friends could sit in the main seating area and gallery with a further 200 recorded ministers and elders on the facing benches.

Friends from Stillwater told me it was patterned after Mount Pleasant's meetinghouse, though Mount Pleasant has a larger gallery, wrapping around both sides as well as the back, allowing it to seat 2000.

Mount Pleasant is less than 30 miles from Barnesville, OH where Stillwater is located.

Imagine it: there were so many Friends at one point, that two meetinghouses each holding well over 1000 people, could justifiably exist within 30 miles of each other. Surely, they didn't say "well, we have 50 people right now, better build for 1500 just in case!"

While Elias and Jesse Merritt had been journeying to Mount Pleasant, dissension had been rife at home. One quarter of the two thousand members of New York Monthly Meeting had withdrawn to form an Orthodox Meeting.

Two thousand members in a single monthly meeting! That confirms those sorts of numbers were not limited to Ohio, and the building was not simply "optimistically sized." That's also not counting attenders. Though it is, of course, important to note that a monthly meeting at this time was made up of several (~4) preparative meetings, so there were only 2000 people present in one building once per month.

And lest you think, "well, my Meeting has 300 members on the roles, but only a few dozen show up each week," consider Discipline in this time. If you didn't show up, you'd have concerned Friends checking to see if you had taken ill. Friends were disowned in this time, and Meeting memberships were expected to be promptly transferred. Two thousand members means about that many showing up!

Unless the Lord build the house, the construction workers are sweating for nothing....

This is the view from the facing bench. The wall on the left is the center divider, not the end of the building. 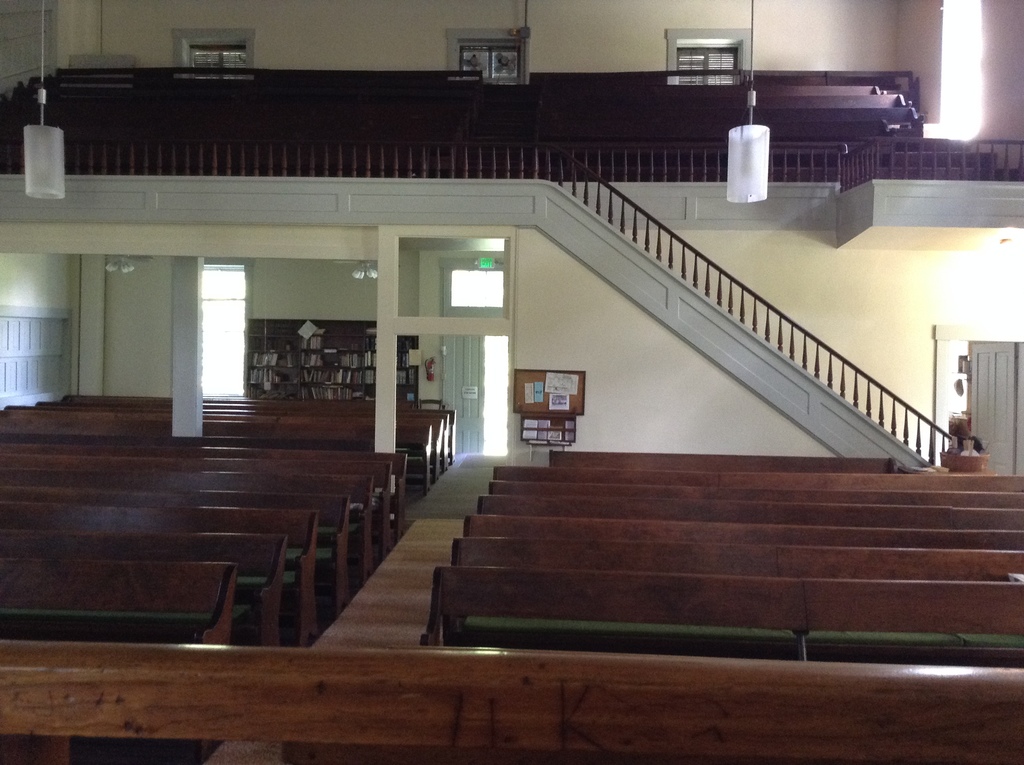 Seeing that we could once fill a place like this makes me really think more about the recent conversations around outreach I've had with people in BYM.

And then there's my own Meeting's Meeting House building, which holds fewer people -- which took many hours of largely volunteer labor, largely for the sake of the Peace Resource Center there, and the AFSC office also included -- which gets them effectively rent-free office space, at the price of moving out of range of the poor Hispanic clientelle they used to serve in a downtown building (which was being muscled out by the City's gentrification scams...)

The place can be readily seen from the freeway rushing (slowly, often clogged) far below... and arouses some curiosity, which occasionally brings in interested people (as I'd hoped.)

But always the "outreach" discussions showed -- at best -- a focus on attracting 'suitable' members,  rather than on finding people who might need us.

To build a city on a hill, and hope that people might climb 'up' to us... Hasn't that been a besetting flaw for a long time now?

The gallery at the back of the meeting room is the "youth gallery."  The raised seating in the front is called the "ministers' gallery."   I think "facing benches" is a post-traditional term introduced by groups which no longer recognized ministers.  I think the elders traditionally sat on the benches on the same level as the main body of the congregation.

Forty-five years ago, when I joined Ohio Yearly Meeting, the part of the meetinghouse in the picture, which used to be the women's side, was nearly full during yearly meeting.

Initially, many Friends migrated, often to Iowa.  No doubt, exogamous marriage also had a large impact.  For a time, those who "married out" were disowned.  But, even when they weren't, marrying an outsider often resulted in the member leaving sooner or later, or in the children being raised outside of Conservative Friends.  More recently, the boarding school inculcated values and a belief system at variance with the Conservative Quaker tradition.

Another persistent problem was the lack of effective outreach/evangelism.  This lasted until well into the 1970s and, in my humble opinion, remains a difficulty even today.

the bleachers [whatever term you want to apply to this.]

As far as I've heard -- and as I find most plausible -- getting to sit in the bleachers was very much tied to  a person's status within the Meeting, and sitting there uninvited Wasn't Done...

The horizontal  railing at the bottom of the picture  extends the length of the ministers' benches, although the one in view is affixed to the back of the elders' bench.  It is there for the ministers to hold onto as they preach.  Why did the ministers need to hang on?  They typically quaked!  Hannah Whitall Smith: "...unless a preacher had enough of this 'quaking' to make their hearts palpitate and their legs tremble, they were not considered by many to have the real 'call' to the ministry at all."

Now I get it:  a functional arrangement.

Nobody special -- might speak but probably wouldn't -- audience area.

Minister -- up on the higher rungs so people could hear better.

In a healthy meeting, there was movement by some from the body of the meeting, either directly to the ministry or through the intermediate step of eldership.  Cyrus Cooper was a good example.  In his youth (I can't recall the exact age), he was recognized for his religious concern and named as an elder.  Then, as he began to speak in public ministry, he was recognized as a minister.  Each time, I suppose, his seat was relocated.  By the way, Cyrus was a member of West Grove (Orthodox) in Pennsylvania when he moved from the "laity" to "eldership" and then to (speaking) "ministry".

Stephen Grellet's career was somewhat different.  He had hardly been granted membership when he began speaking in ministry and was invited to sit in the ministers' gallery.  I think he undertook his first religious visit before he was even recognized officially as a minister.  In his case, there was no intermediate step in which he was a non-speaking elder.  You have probably known people whose careers went like Stephen's.  Unlike some who moved up very rapidly, Stephen never lost his zeal or gift in the ministry.  I believe that all of this happened in a meeting in Philadelphia.

As I understand it, Dr. John Rutty (in Ireland) was recognized as an elder, but never as a minister.  He was quoted as saying to the Lord: "if I cannot be a knife, make me a whetting stone," or something to that effect!  He was also famous as a Quaker diarist.

The "center divider" is called the "shutter(s)" and/or "the partition".

Traditionally, neither the whole membership nor the non-members attended meetings for business.

This is the view from the facing bench. The wall on the left is the center divider, not the end of the building.

Seeing that we could once fill a place like this makes me really think more about the recent conversations around outreach I've had with people in BYM.

Your wealth of Quaker information, Bill, is much valued by me and I'm sure others! Fascinating! Thank you!

It appears to me that the Hicksites either welcomed the Progressives or at a minimum tolerated them in their meetings and as F(f)riends.  And eventually, these Progressive Friends greatly influenced the Hicksite meetings in philosophy, a disdain for hierarchy, elimination of elders and recorded ministers, and even the universal spiritual outlook so dominant now in liberal Quakerism.  If you read the Progressives manifesto, it sounds like a description of modern liberal Friends - not like the Elias Hicks adherents.  No wonder the Progressives could happily lay down their monthly and yearly meetings.  They won over the Hicksites by osmosis!

Re: Dr. John Rutty:  I think it was "whetstone" rather than "whetting stone".