Chapter 3 Jesus Christ MBA: Take Me Out To The Ball Game 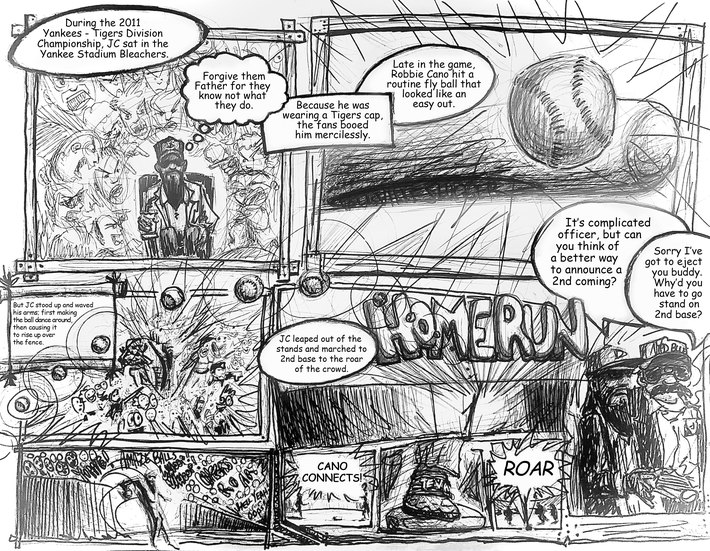 In early October, 2011 the Yankees were playing the Detroit Tigers at home for the American League  Eastern Division championship.  J.C. sat in the right field bleachers, wearing a Tigers cap along with his vested suit and sandals, drawing merciless taunts from Yankee fans.   Throughout the boo’s, J.C. sat patiently thinking:

“Forgive them, Father, for they know not what they do .”

“What’s with this dude?” yelled one disgruntled fan. “Where the hell did he come from?”

“I don’t know,” yelled another.  “ But with that hair and beard it looks like freakin’ Johnny Damon is back, and he’s gone over to the dark side.  Booooooo !”

Then, with the bases loaded,  the Yankees’ Robinson Canó hit a fly ball to center field.  At first, it looked like a routine out. But seeing a dramatic opportunity, J.C. stood up in the stands and began waiving his arms above his head.  Suddenly, the ball halted in mid-air, and began dancing around.  While the fans let out a collective gasp, the ball altered its trajectory, picked up speed and passed over the fence for a grand slam.  Bedlam erupted. The stadium cheered wildly.  J.C. climbed out of the stands, marched across the field and stood on second base,  raising his arms to his now adoring fans.

Soon, a NYC police officer appeared and escorted J.C. off of the field.  While doing so, he exclaimed:

“Sorry I’ve got to eject you, Buddy, but what’s the deal? You show up lookin’ like Johnny Damon, impersonating Jesus Christ; work some hocus pocus on Canó’s  homer; then  stand on second,  getting yourself tossed.  I mean, what the hell’s going on?”

“Well, Officer, it’s complicated.  But can you think of a better way to announce a Second Coming?”

Permalink Reply by Christopher Hatton on 7th mo. 18, 2022 at 3:56pm
I‘m not a baseball fan, and didn‘t understand the „Johnny Damon joke“ but it did make me smile.